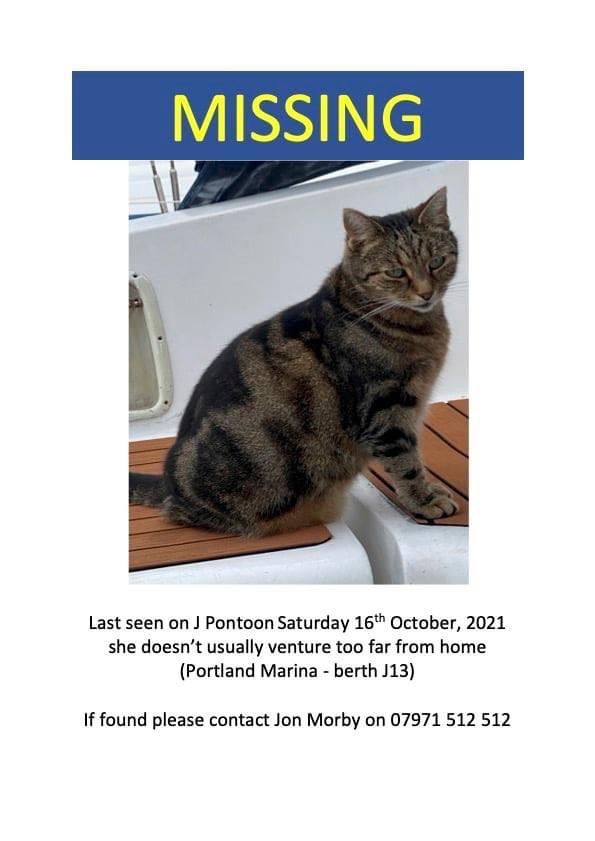 On the evening of Saturday 16th October, I had a few guests over for dinner. The night was fun and Vesta was happy sitting on people’s laps and being loved. Then one of the guests jumped up to take a phone call and rushed out of the boat.

I had already asked everyone to make sure that they kept the hatches closed, primarily to keep the heat in, but also the cat as the weather for the week was not looking all that promising (40+ mph winds were forecast).

Before I noticed that the guest had not, as previously instructed, closed the hatch, it was too late, Vesta had run up the ladder and out of the companionway! Now normally, this isn’t a problem. I would leave the boat open when I’m out and Vesta would come and go as she pleased.

Vesta stayed out all night, despite my leaving the hatch open just in case she came back (yes, it was bitterly cold and wet that night).

The following night I found some signs that she may have been nearby (fresh poo on another boat) but other than that, there was no sign.

We’ve put posters up and have posted to every missing cat group I can find on Facebook that covers the Dorset/Portland/Weymouth area. Less than a week after Vesta went missing, these posts have been shared more than 100 times!

The marina has very kindly agreed to put posters up on the gate and noticeboard, but so far there have been no sightings. One of the marina staff has been round in the workboat looking in all the “usual” spots in case she fell in and was washed up somewhere, but (thankfully) no signs of her there either.

It has been nearly a month since Vesta went missing and despite dozens of suspected sightings, she has not as yet been found. I have personally walked miles and miles in the local area checking out suspected sightings, and have even collected and taken stray cats to local vets so that they can be scanned and reunited with their owners. I only hope someone eventually finds Vesta and does the same.

We have had several storms, winds topping 80mph and still no sign of Vesta. At this stage I’m beginning to give up hope and can only assume she has either stowed away on another boat and is sunning it up in the Bahamas somewhere, has found another loving home where it is warm and there is a fire and she is being fed and cared for, or that she has met Davy Jones and has learned to swim with the fishes 🙁

I keep hoping that someone will find her and take her to a vet so they can scan her chip and we can be reunited, but at this stage I’m about ready to accept that she isn’t coming back 🙁