Today was another great team building day as we got to know each other and discovered more about our fellow class mates over lunch and “high tea” at a variety of sandwich shops around London.

The morning was spent discussing types of films and why they’re made. We discussed Arthouse Films, Film Noir, and more.

We learned the sad fact that Hollywood are only interested in making big money spinners whilst smaller “avante garde” films tend to be the arena of independent film makers.

A sad and shocking statistic that over 7,000 films are made in the USA each year and yet less than 10% of them ever really make it to distribution, and even fewer actually make money or break even.

On the plus side, due to the numbers involved, there is more chance of a low budget film being profitable and with self distribution as a real option these days there is even more chance of the indie film maker being successful and with success comes bigger chances and the hope of a bigger budget and so on.

Kate Shenton started small, made a short (Send in the Clowns) for a few hundred, a niche / fetish documentary (On Tender Hooks) and then a feature for £5,000 (Egomaniac) and is now working on a £750k budget film (Bloody Burrito) as a result.  Living proof that your work is a calling card, which if good enough will lead to bigger and better work!  Kate’s genre is horror, and from what I’ve seen of it – somewhat fetish horror at that .. but again proof that catering for a niche audience can be quite profitable.

We discussed High and Low Concept films (high – premise can be described in less than 3 short sentences, low requires a lot more foundation)

We discussed films such as Cars, Logan, Lego: The Batman Movie, Snakes on a Great Plane, IT, Spiderman: Homecoming, and more.

We also learned of the Raindance HND Challenge. A competition for all the students across all the groups. Make a film with £5000. Prove your worth, pitch your idea and be “hired” to make the film. Fail or don’t deliver and risk being cut, just as if you were in Hollywood!

We broke for lunch after a brief visit to the BFI Reuben Library, an amazing repository of all things film related!  I can’t wait to get my teeth into their research materials over the next 2+ years.

The afternoon was another practical class where we learned about lens compression and (touched on) field of view seeing first hand the differences between a shot with a 14mm wide-angle lens through to a 135mm lens using Raindance’s new box of 6 prime lenses. (14,24,35,50,85,135 mm primes).  Next week is the other half of the conundrum – depth of field

Again, best practices on lens handling were reinforced as we took turns to be continuity, camera, 1st AC and model in our group of 4.

Today’s lesson is probably best demonstrated by this image from BokehSharp which I’ve referenced in other blog posts previously. 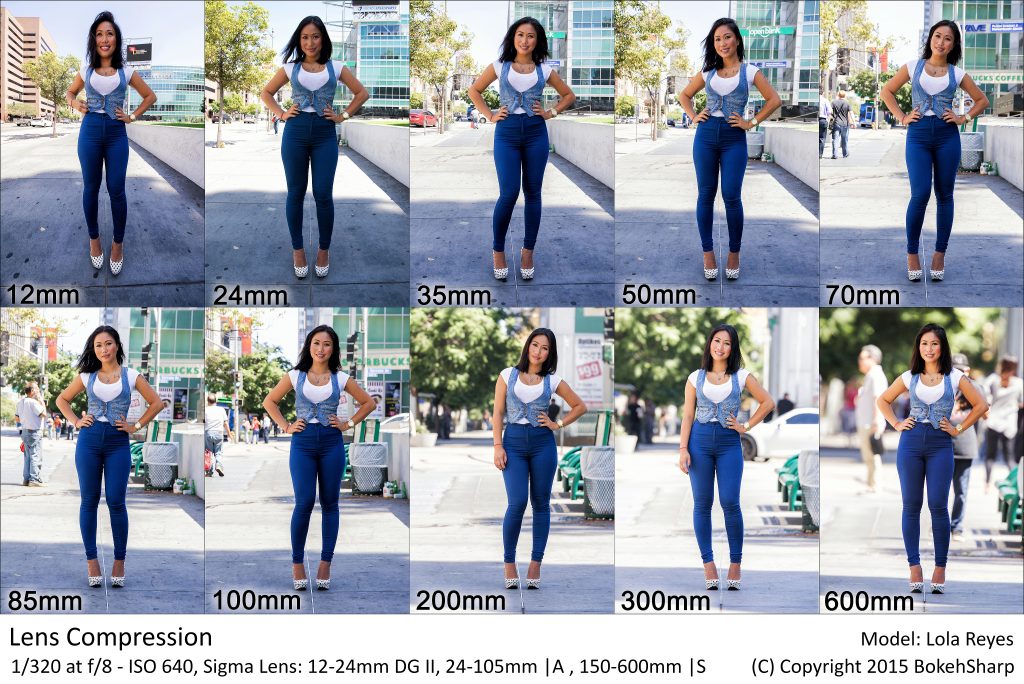 It clearly shows how the wider angle the lens the more detail is visible in the background, whilst the longer the lens, the more compressed the background is, coupled with this image below which demonstrates how items in the foreground can be elongated / made to look much larger than they are. 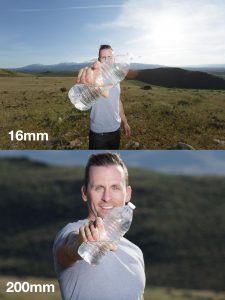