I have now performed sound supervisor functions on at least two HND student films, plus a number of student exercises in the classroom.  Responsibility for levels and ensuring that we had clean and usable audio at the end of the shoot.  This was with a mixture of Zoom H4N and H6N recorders.

This is quite an important role in any film production as if the sound is poor then you either need to re-shoot, do a lot of ADR (Additional Dialogue Recording), or risk people abandoning your film due to the poor sound quality.

In addition to the sound levels and recording, there is also the boom and microphone position … ideally, boom from above, ensure that the microphone is pointing at the talent’s mouth and that you follow the dialogue and keep the shotgun mic pointing at the talent’s mouth throughout the scene.  Booming from below may be an option, especially if you are trying to avoid boom shadow, however in doing so you may well pick up sounds from above including birds or leaves rustling (if outdoors) and other sounds from overhead.

You can use lavalier mics instead of (or as well as) a boom.  Lav placement takes additional time, especially if you want to keep them hidden from the camera, and there can be a lot of noise from clothing and your talent moving (which takes additional precautions, and more time to deal with in the setup phases).

On my own films, I have experienced several issues with the sound being unusable due to noise transferring through the boom, levels being incorrectly set and/or background noise (people talking loudly in the next room, aeroplanes flying overhead, police cars zooming past with sirens blaring, and more).

In my role as sound supervisor, I wanted to make sure that none of these problems impacted the productions I was working on, and in doing so it did mean that I had to repeatedly talk to the boom operator and address issues with the way they were holding the boom (every slight hand adjustment would transmit through the boom pole and cause parts of the dialogue to be unusable).

Monitoring levels and ensuring that adjustments were made promptly to account for any raised voices or whispered words so that we were able to use the recordings.  The last thing you want is the audio to clip/peak and to lose the higher frequencies, or for it to be too quiet and miss the low frequencies.

One issue we had on location was trying to get everyone into the room, but not in the shot.  This required some ingenuity and a certain amount of contortionism as can be seen from this photograph of the boom operator squeezing into a small gap and then trying to position the microphone just outside of the wide shot. 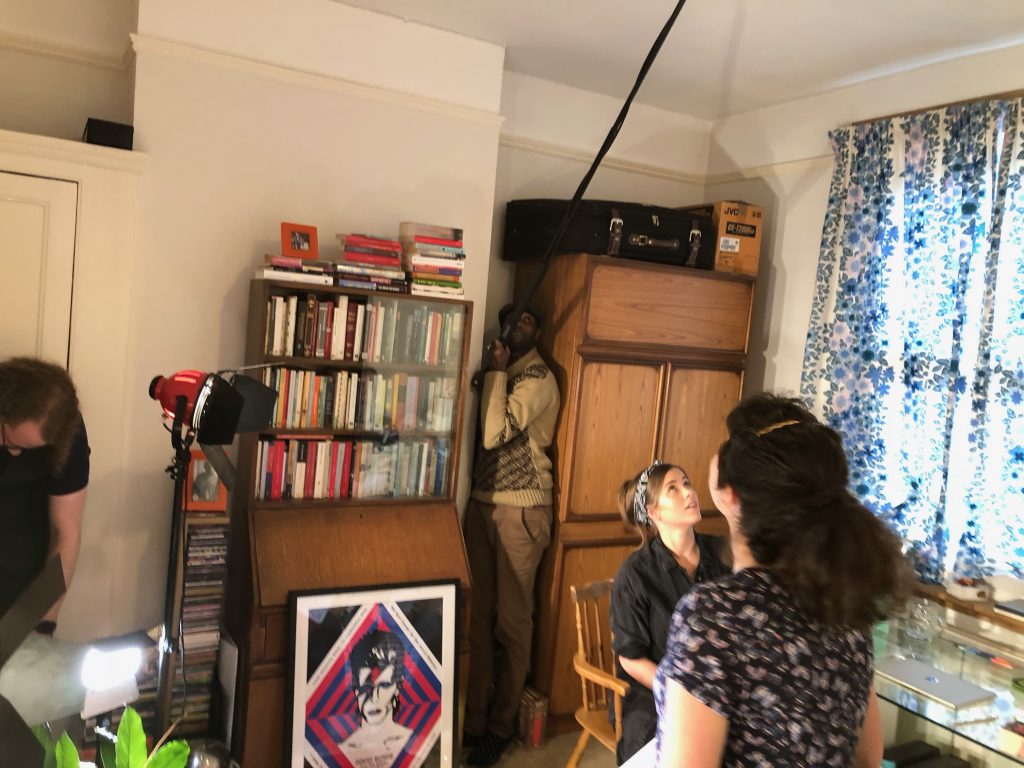 Other issues included the hum of fridges, ticking clocks, mobile phones going off or just simply hunting for signal leaving a bzzt bzzt bzzt on the audio track.  On one shoot we had to hunt high and low before eventually finding an errant Windows Mobile on a desk which belonged to a parent .. We then had to try and work out how to put the phone into Airplane mode as no-one was quite sure how the Windows mobile actually worked! (we ended up just turning it off). 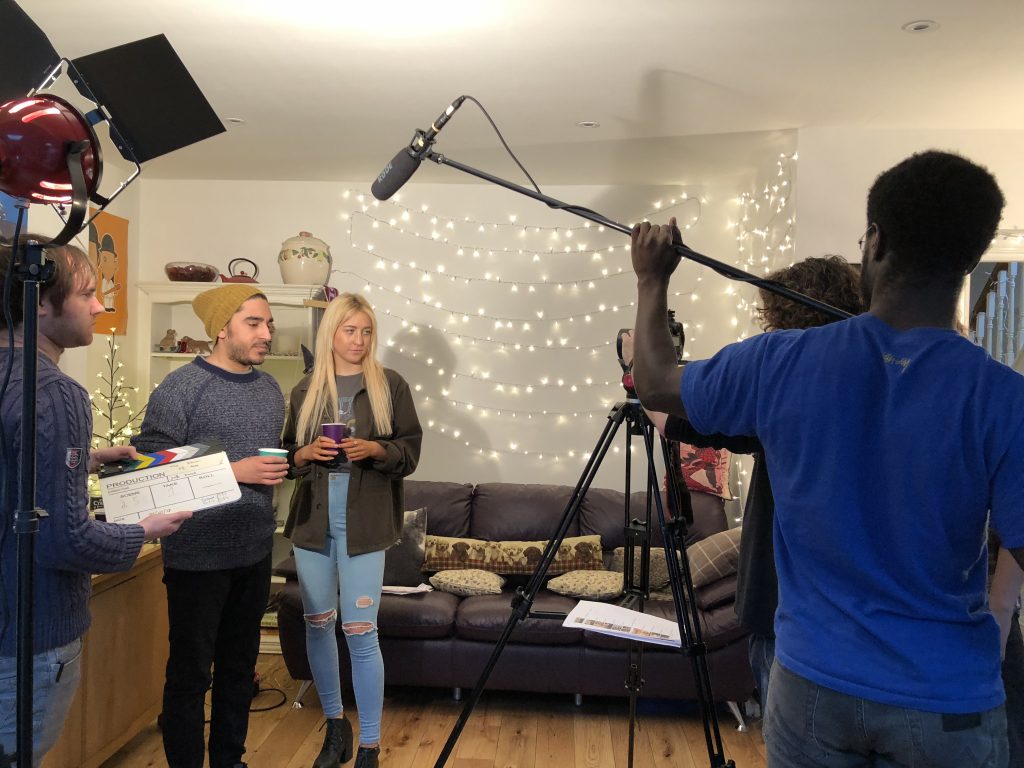 There will always be challenges when filming on location, the trick is to work around them and to try to get to know your environment before the shoot starts, in order to minimise any wasted time during the actual shoot.  Locating analogue clocks and ensuring they’re removed from the room, making sure that mobile phones are turned off before shooting starts are all good pointers.

One additional issue we had on one of the shoots, which took a while to locate, was a 50hz hum on the audio in certain rooms.  We eventually tracked this down to an XLR cable being routed alongside a power cable (I had carefully ensured that the power cables were down one side of the room and the XLR cables were around the other side, even through doorways to ensure the maximum separation), however someone had very kindly decided to tidy and thought it would be a good idea to bundle the cables together, which resulted in a hum when the lights were on.

Lesson learned – just because you have painstakingly taken the time to keep power and audio lines apart all the way around the location, someone may quite happily come along and “tidy” and mix all the cables together without you noticing.

If I were to do this on a more regular basis, I think I would definitely buy a “GaffGun” and use it to tape down all cables, making it a lot harder for busybodies to come along and move the cables when you’re not looking.

This is definitely on my Christmas list, Santa please take note!